The Grappling Gun in Virtual Reality 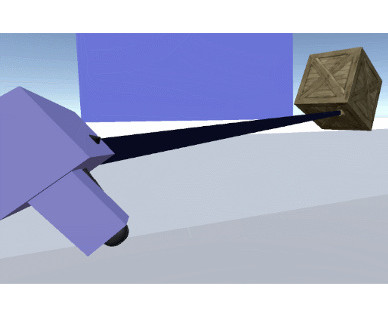 In smart-thief VR, the player incarnates a thief who uses various tools to accomplish his missions. The Grappling gun is one of them. I prototyped it with unity and C#. For some features, I used the VRTK - Virtual Reality Toolkit.

I 've had in mind two principal goals when designing this tool :
- It must be as intuitive as possible. The player must immediately know how to use it.
- The controls is mimetic. The player needs to push only one button on the controller. He uses the gun with his other hand.

The main use of the Grappling gun is to pull objects. When I modelised the crank, I noticed how the sense of scale changes in VR: the crank would look much bigger on a 2D screen than it currently is. Also, I coded the "physics" of the crank and didn't use the physic of the unity engine. Because, I wanted to make the controls more precise and natural.

The game has an original locomotion system. The player uses his gun to connect two pylons then climb on the rope. Also, the pylon itself can be pulled with the Grappling Gun.