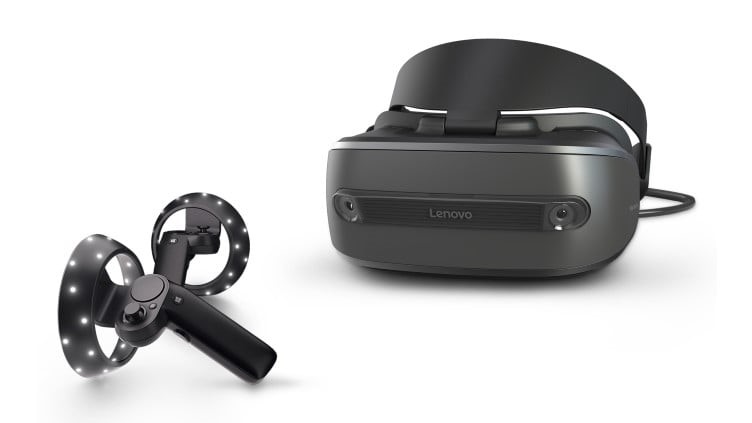 First of all, let’s talk about ergonomic and user comfort. The headset is incredibly easy to put on the face. Thanks to the twist-strap that is worn around the head. This provides a better hold on the helmet while having a freer head. I find this helmet much more pleasant to wear. That twist-strap looks like the one for the PSVR. Finally, a significant advantage is that the tiltable viewer. It enables to look around without removing the headset. This is a real time saver when developing virtual reality games.
Then, for the technical characteristics, the headset has a smaller field of view than an Oculus rift but a greater resolution. This gives a very sharp image. I feel a greater presence with the headset. It also gives a more professional feeling when in use: As a work tool, I wanted to use it more than the HTC Vive.

As for the Motion controllers, they are thinner and the buttons requires much less pressure for using them. The motion controllers are much more enjoyable to use that the HTC vive controller. Especially the grip button (grab in the image) that is also more easily findable. Even if the choice to have a thumbstick button seems weird at first look, it proves its utility right away. For the movement a tumbstick is always better than a touchpad. Therefore, it’s easier to navigate and reposition yourself after a teleportation. It’s a good choice made by Microsoft because unwanted or uncontrolled movement can be a source of disorientation and motion sickness in virtual reality. Additionally, having a stick will probably make the oculus rift games more playable.

Now, let’s talk about the biggest technological difference in comparison with a HTC vive or an Oculus Rift :

Instead of having two external sensors to track the position of the headset and the two motion controllers, the headset has two cameras. The concept is nearly identical as the one used in Hololens to track the environment. The advantage of this method is the time saved during the installation. Also the user can configure more easily the size and shape of his “tracking area” or “play space”.

The ability to give a particular shape is an outstanding advantage for the consumers. On one hand, the rooms of many people are rarely completely unobstructed. Not so many people have a wide empty room that could be conveniently used for VR. Therefore, the ability to give a complex polygonal shape that follow the exact amount of free space as we have is very practical.

On the other hand, we know our own home better than the external environment. The specific shape of our play space is unique to us. And, when we put the headset on our head, we can more easily know where we are in the real word thanks to the unique borders of our play space. The user has more confidence when he moves in that space. A particularly good example is with “Gorn”. When I play it with an HTC Vive, my strokes were often weak. I was afraid to break something. It was not the case with the Lenovo headset because I know where I was and where to place myself to give a full stroke.

Those two factor combined make the Lenovo explorer an excellent headset for VR at home or in a small work office. By the way, that also is the marketing positioning of Microsoft regarding the “mixed reality” (and therefore also the virtual reality) but I will talk more of that specific subject on my next blog post. Now, let’s talk about:

The weakness of the headset: The tracking of the controller.

Its biggest weakness comes from its tracking technology. When a motion controller is not viewed by the user, they are not tracked. (Because they are also not viewed by the camera.) Nonetheless, it’s not exact. Microsoft is first and foremost a software maker. So, they offset the hardware’s weaknesses by software improvement. Here is what you can find in Microsoft’s technical documentation:

Small explanation of the “state” of the controller. When they are momentarily not in view of the headset, the app uses the inertia and the internal sensor of the motion controller to compute their position. The biggest downfall of this method is that the more time goes by, the more the computed position is approximate. At one point, the position is too much approximated, then the system will body-lock the controller to the user, tracking the user’s position as they move around, while still exposing the controller’s true orientation using its internal orientation sensors. In that state, the controller behave like the one you can find on mobile VR headset (like the GearVR).

I took the time to test all of that and for doing it, a small tip: Go to the window mixed reality home then look at the ground. You can see the shadow of the controller! This way, we can observe how the controller behaves when not in view!

But it’s “just” testing by observing the shadow on the ground. So, how does it really work ? Let’s test that motion controller on multiple real software. For that I’ve chosen the bow since it’s an interaction that required both hands.

The bow comparative use

I choose those three games. Each one use a bow. Each time, I play normally like I would with an HTC Vive. The result was very interesting! And they are surprising! Not what you would have guessed. Let’s go from the « worst » bow to the best!

First, holopoint. His bow just doesn’t work. It’s unplayable. When I tried to aim at a target, my hand controller that grips the arrow (I’m right-handed) just goes to a « random » position. Therefore, for nearly each time I tried to shoot an arrow I would have to try 3 times just to do it right! It’s a really fast game so with this type of gameplay it’s just impossible to play it right now. Also it is worth mentioning that catching an arrow in the back surprising worked very well.

Then, Longbow, it’s a mini game from the lab. The result was totally different than the previous one! The bow responded very well. Of course sometime my hand would have wrong position. The game is largely playable. But why it is like this? Why is longbow bow better than holopoint bow? is it better programed? Well, the lab is made by valve and holopoint by and indie dev. Maybe the lab uses more of the steamVR API and somehow compensate for the « less-effective » motion controller? But that doesn’t explain all of it. What really made the bow better is his design!

Why falling a shot in holopoint is much more frustrating than in longbow? It all comes from the game design of the game. In holopoint, the game is divided in very short waves. The player has to shoot fast and precisely on the enemies. If a player fail to do that it often means game over. Whereas in Longbow. The game is slow paced. The enemies come slowly and you need to be shot multiple times. Since there are moving targets, the player is expected to miss a few shots during the process.

Thanks to this little experiment, I learned a very valuable design lesson: Making a VR game that is prone to « errors » that let the player fail his interaction makes it not only accessible for new players but also for multiple VR devices. But why should game designers follow that rule? « My game is released only on that particular VR devices, why should I care about other devices? » Well, VR is a very new and exciting area. But also very changing! Look at how many headsets are released and soon to released on the market! We can’t know what will be the capability or what will be the headset that will be mainstream in the future. Therefore making a game, with a VR-device friendly design can make the game last longer in time because it will be playable with new headsets. Maybe that’s how Valve designed the lab, making it more portable to different VR devices. (And it’s not a hard guess, look at how open is the politic of valve regarding steamVR software and hardware).

Lastly, GORN! What I’ve guessed is « It will work as bad as longbow because it’s made by indie dev ». I was so much wrong. Not only does it work well,
it works better than longbow! But wait a second… Why does it work better? This bow is very simple and has no strange characteristic… what are the differences between the three games? The answer is more on a level design point of view. A technical point about the level design of those three games. Where does the level design force the player to aim? In Gorn, forward. In Longbow down. In holopoint, mostly up and at unnatural angles. It’s like in real life, bow is used mostly forward or down, but up? Barely.

Here is a recap chart:

That finishes the first part of my article. I hope you enjoyed it!

In the next part of the article, I will talk about the strategy of Microsoft regarding VR and how it affect their headset.

Thanks you very much for reading my post! Don’t hesitate to give me feedback about it.

A blog for sharing my passion of Virtual Reality and games